The pictures below were taken in September and October in the mountains that overlook Flagstaff, Arizona.  In Flagstaff, the primary fall beauty is the Aspens turning yellow and the contrast with the surrounding Ponderosa Pine. 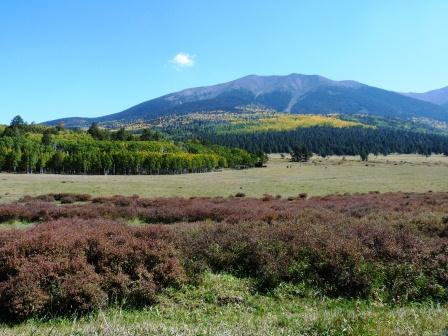 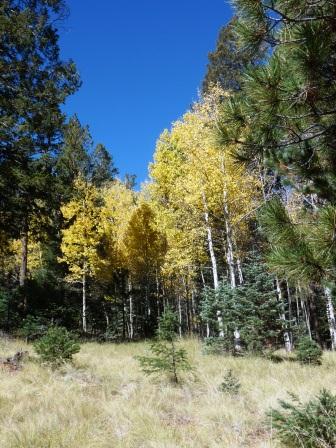 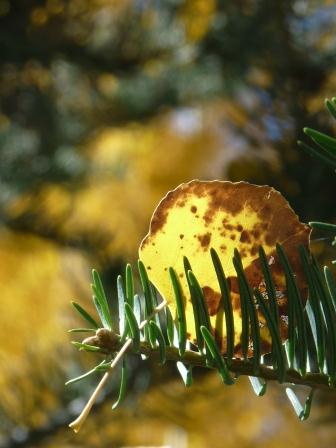 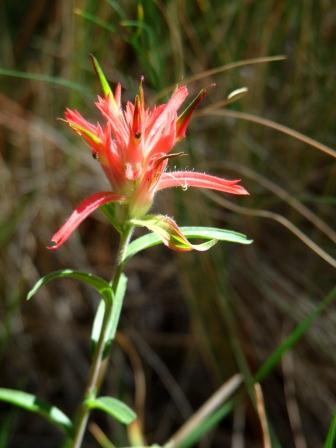 The New Brewery on the Block: Wanderlust 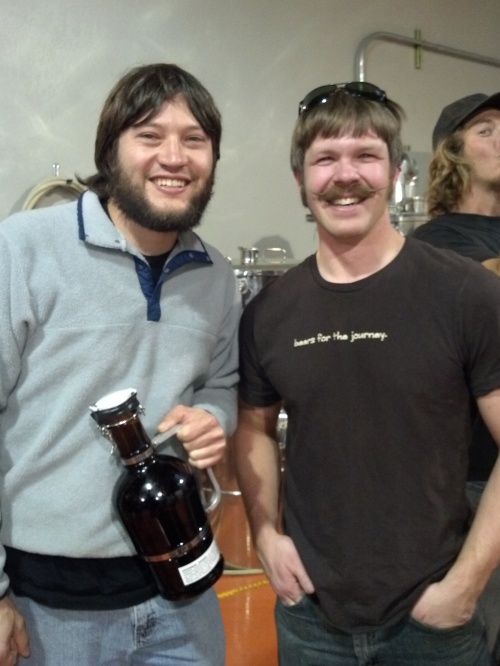 Yes we have not visited and written about a brewery in a long while. It’s not that we have not been going to breweries… they just don’t seem blog worthy when they’re in your backyard. And truth be told we have a lot of local breweries: Beaver Street, Flag Brew, Cosmic, Mother Road, Lumberyard and Mogollon. They even put out some good beer.

Thankfully, Wanderlust has come to us to solve that problem of not having something new to blog about.

Last Saturday was a long anticipated event for Flagstaff beer lovers. The grand opening of Wanderlust. Wanderlust is a little different, their emphasis is on distribution. They do not have and have no interest in getting a kitchen. They are a one man show and the ring leader is  Nathan Friedman. The brew master Nathan is a long time home brewer taking the plunge and going professional. His specialty is Belgian beers. I suspect this is not only because he is good at them but is also what he likes to drink.

I had one major fear for the kick off of Wanderlust – running out of beer. Sure it sounds crazy, but this is a crazy town and running out of one or more beers is standard fare for this town. Wanderlust is the smallest of the Flagstaff breweries, so the fear was even more real.

Sharon and I had the Belgian Pale ale and the Oatmeal Stout as well as the Local Farmhouse. The Belgian Pale Ale was a stand out for me. I have had a few different Belgian IPAs that all tend to be over flavored with different very strong flavors competing for dominance. This beer was flavorful, unique, well balanced and easy to drink, well at least for those of us who like hops.  We got our growler filled with the Belgian Pale Ale for $12.

The Farmhouse is smooth, not too dark and has lots of subtle flavors that suggest it’s more mild than it really is. It hides a 7.5% ABV punch.

I look forward for good things to come from Wanderlust.

Stepping Up My Bike Commuting

As most of you have probably heard by now, I am working for American Conservation Experience. This means I am often working in the field for days at a time. For most people this would mean needing a car to haul gear.  Not for me, not with my Fargo bicycle.

Yes I also carried the orange pack in the foreground.

Sure, being a one car household has some to do with riding more, but there is more to it. Living in Flagstaff forces you to up your game.

It looks awkward but this bike is built to haul and handled surprisingly well.

Here in Flagstaff people haul multiple children simultaneously by bike.  Sighting someone riding to work with 60 pounds of gear in the rain is common place. I certainly appreciate being constantly reminded that I should up my game. It feels good to ride strong even when it is uphill, in the rain, with a rig that may be north of 80 pounds.

Fourth of July is a big deal in Flagstaff, tracing all the way back to 1876.  It was in that year that a group of travelers camped in this area on the fourth of July and decided to celebrate the country’s centennial by cutting down a pine tree, stripping it of its branches and bark and raising it as a post to hoist an American flag.  They left the pine pole standing when they moved on and it became the landmark that ended up giving Flagstaff its name.  We celebrate every year with a huge parade downtown.  This parade is serious small town fun.  Everyone is either in it or watching it and it goes on for hours.  This morning I represented AmeriCorps in the parade and then got to take a bunch of pictures.  Here are my favorites:

These ladies were with Sambateque

We jumped in behind the Peace Corps group 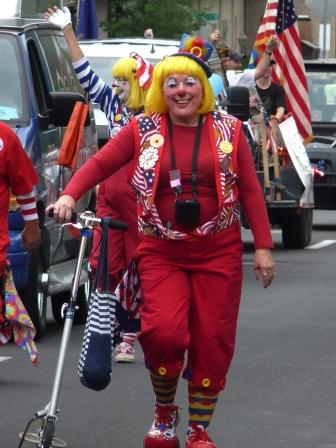 For some reason the APS (utility) employees dressed up as clowns 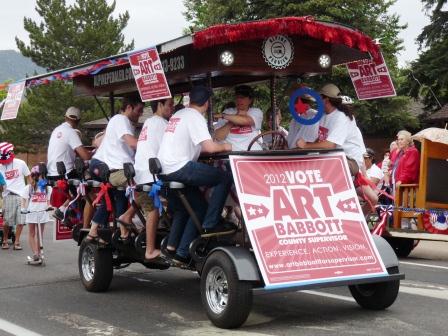 the Alpine Pedaler, a human powered bar, was dry this morning 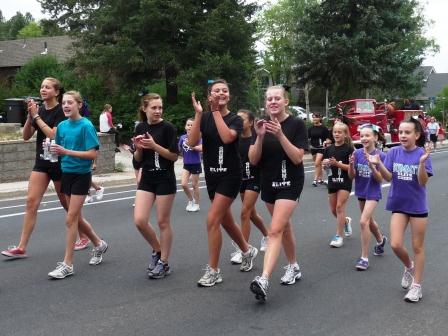 I had no idea there were so many cheerleaders in Flagstaff

I was very impressed with the gymnasts

Shannon oozed patriotic cheer as she promoted Pickin’ in the Pines 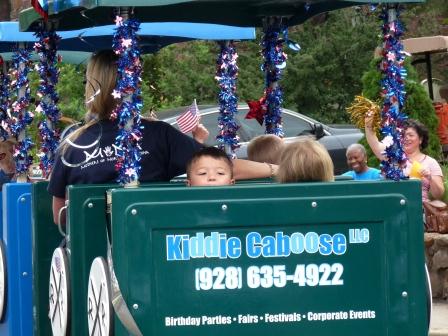 The Hopi Dancers walked with the Museum of Northern Arizona 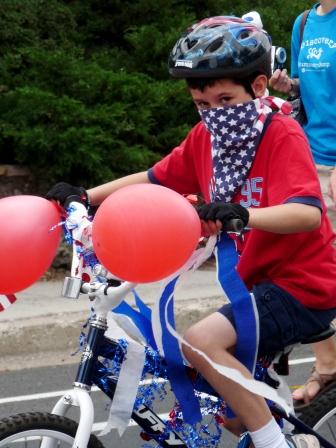 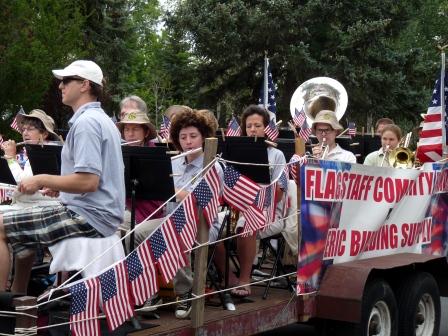 Don’t hit any bumps or you’ll lose the tuba section! 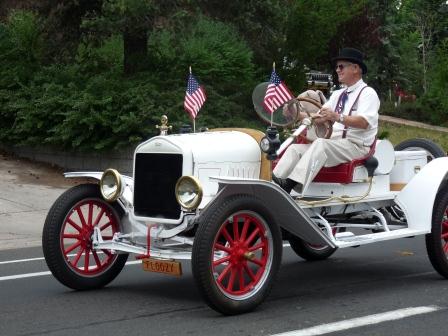 This was my favorite of a long line of classic cars

This vehicle was towing a demolished demolition derby vehicle 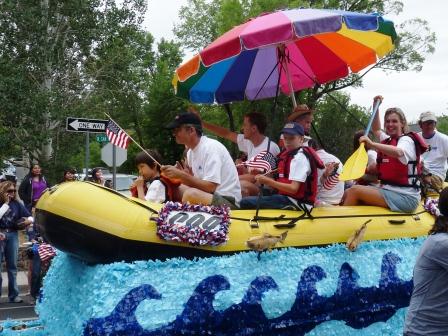 One of our AmeriCorps members, Patrick, promoting recycling

Who knew there was an antique tractor club? 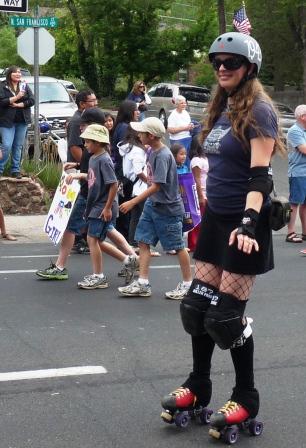 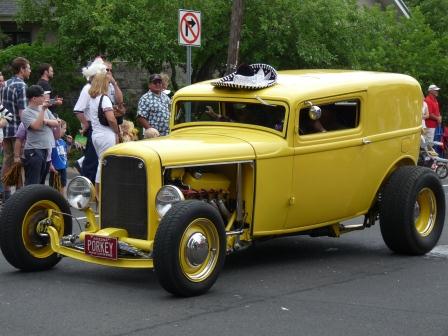 Thank goodness for the rain today.  Unfortunately after 65 days straight without even a drop of rain we are under severe fire restrictions and will not be seeing any fireworks tonight.  That doesn’t stop Flagstaff from having a festive Fourth though!  Happy Independence Day!

The Jedi trail is a long standing local staple and  goes from the Dry Lake to  Little Gnarly near the Shultz Creek Trail junction. The Jedi is known for its many log crossings. One of the hardest ones has been cut out. As you can see by my minor fall, my log crossing skills have gotten a little rusty. Its very rare that some masochist tries to ride it in the uphill direction and its generally ridden down. Its a lot more fun than going down little Gnarly and its also better than going down Lower Brook Bank to Elden Lookout trail.

My parents recently took a Road Scholar trip from Flagstaff to Canyon de Chelly that they thoroughly enjoyed.  One of the highlights that they raved about was the chance to go on interpretive walks with Lois and Steve Hirsch.  Well, it turns out that Steve and Lois lead interpretive hikes around Flagstaff on behalf of the Forest Service.  When Jay’s parents came to town, Cindi and I had the opportunity to go on one of these hikes, along Pumphouse Wash, just south of town.

One unexpected delight was learning more about the Riordan brothers (whose home I give tours of).  It turns out that the pumphouse wash area is one of the areas that they logged and there are still signs of the logging business if you know where to look.  The tree trunk shown above offered a lot of data.  The fact that it is cut at waist height instead of close to the ground indicates that it was felled with a cross cut saw and was almost definitely cut before the mid 1920’s. 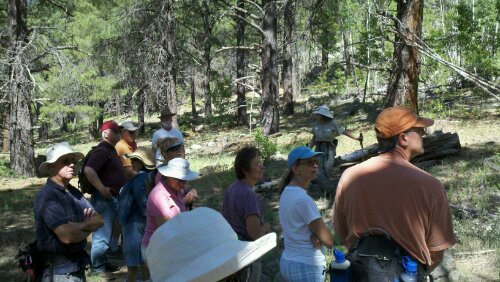 As you can tell, the hike was well attended.  Steve and Lois took turns sharing knowledge about plants, animals, local trails, history, and culture.  Everyone we spoke to in the group was local and some of them were even native Flagstaffians.  Group members added knowledge to the discussion.  At one point a group member spotted a Zone Tailed Hawk and explained that it was a unique hawk that mimics the turkey vulture to trick its prey.  I was really glad I had brought along my binoculars (thanks Mom!). 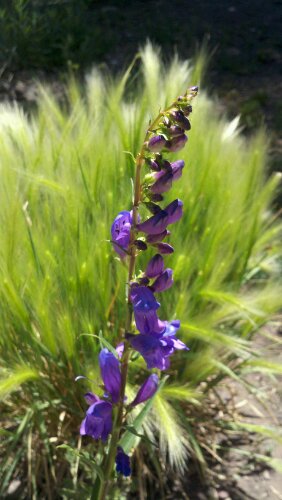 Overall it was a lovely way to spend a Sunday morning and I hope I have the opportunity to go again. 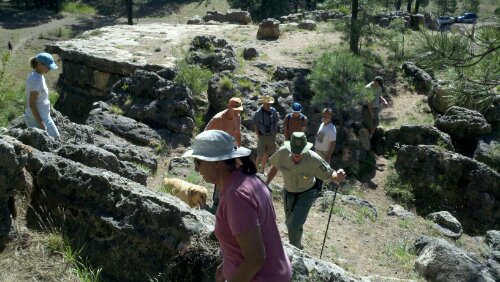 This week in Flagstaff is Bike to Work Week and I have ridden over 70 miles to get to work and meetings and errands.  I have discovered the joys of bike commuting, like riding through a mist of water when the sprinkler system on campus is on next to the bike path.  From the seat of my bike this week I watched an osprey dive down to a pond to catch a fish.  I relish in the door to door convenience of bike commuting, and flying along on the bike path as traffic sits at a standstill waiting for a school to let out.  The school kids ride by on their bikes and we give each other the nod, connected by our shared experience of getting around town on two wheels.

Of course, with all the joys and benefits of bike commuting, there are also challenges.  So here are a few tips to help you overcome the challenges of a day in the saddle.

Have you biked to work or for errands?  What tips would you share?  If you haven’t started biking, what do you see as the barriers to biking?

Jay doing a short test ride of the commuter bike with attached trailer — Note: he put on a helmet to test it outside.