This week meant rain, thunder, and lightning for much of Arizona.  It felt like the chaos of the weather was spilling over into our lives too.  We headed to Phoenix on Friday evening for the Arizona AmeriCorps Governor’s Conference.  There were lots of logistical challenges to getting there, but ultimately we did and it was fun to meet AmeriCorps members from around the state.  It was also nice to catch up on some wedding planning with Jay’s parents.  We ordered a suit for Jay and got ready to order invitations. 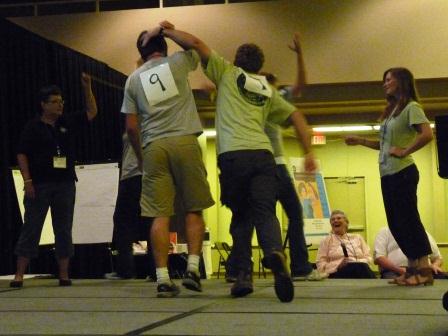 Over the weekend, Jay started having pain in his mouth.  Not a good sign when you have had dental problems in the past.  The pain got worse Sunday night and first thing Monday morning Jay got in to see his old dentist here.  Bad news – it was time for a root canal.  After suffering through a full day of intense pain, he got in to see the endodontist on Tuesday morning.  We’re happy that Jay is no longer in pain and back to his old self.  Boy do we miss dental insurance.

Volunteering:  Sharon started working on the website for her class reunion and prepared for her new officer role with Toastmasters.

Something New:  Jay got a new suit for the wedding!

Highlight of Being in One Place: Having a regular doctor or dentist who you know and trust.

22nd Week in Review: Settling In

We’ve been living in limbo for the last five months.  Not much has changed about our situation – we are both still only employed through September – but something felt different this week.  We switched our car insurance, registration, etc. to Arizona and submitted change of address forms to the post office.  We are still living out of boxes, still too temporary to bring our cat home, and still unsure of where we will be after our wedding in October.  That said, we would like to stay in Flagstaff for awhile if it works out, and taking these small steps was one way to acknowledge that.

Another small step I took was to accept an officer role with our Toastmasters Club.  I have a back up in case I have to leave in October, but for now I am making a commitment and putting those roots out a little further.

Volunteering:  Sharon gave a tour at Riordan Mansion and trained new readers at Sun Sounds.  She has also joined the planning committee for her 10 year high school reunion and got inducted as an officer in the Toast of Flag Toastmasters club.

Something New:  Jay showed me the new segment of Loop Trail near our house.  We also finally made it to the farmer’s market on Sunday.  And my soccer team won our first game!

Highlight of Being in One Place:  Taking a leadership role in a community organization like Toastmasters.

21st Week in Review: Summertime and the Living’s Easy 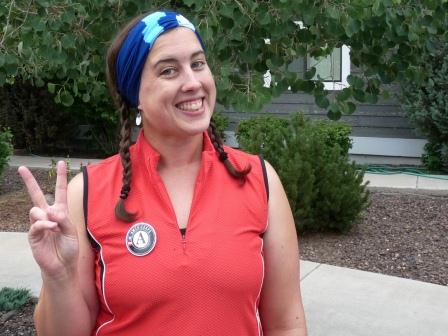 Not much to report from the week that was.  I picked up Jay on Wednesday and we enjoyed spending the weekend together, sleeping in, mountain biking, having brunch with his parents, watching roller derby, and hiking.  It’s a beautiful Flagstaff summer and we are feeling lucky to be here for it. 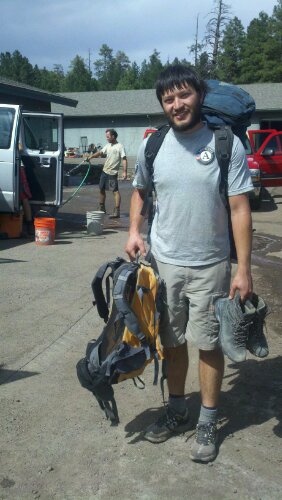 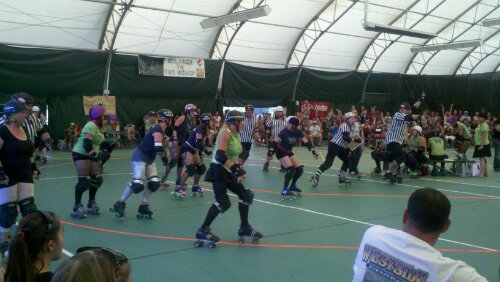 Something New:  We attended the very first ever Roller Derby Bout in Flagstaff.  A first for Flag and a first for us!

Highlight of Being in One Place: Being part of the community — I definitely felt connected as I walked in the Fourth of July parade downtown.

Week 20: Learning to Be Apart

As I wrote about earlier this week, the key characteristic of this week was that I was at home and Jay was not.  Jay has started a new job where all of his work is in the field, camping in the forest, away from internet or even cell phone signal.  He will go out for 4-8 days at a time and then be home for  5-6 days.  This week fell into the 8 day window that he was working.  I spent the week looking for ways to keep myself busy and trying not to miss him too terribly.

Volunteering:  Sharon gave a tour of Riordan Mansion on Friday.  It was finally time for the Made in the Shade Beer Tasting Festival, at which Sharon volunteered all day, assisting with the Brewer’s Breakfast, managing live updates on Facebook, and MCing the costume contest.

Beer of the Week: Amazingly enough Sharon did not taste any beer at the festival (since she was working), and Jay can not and does not drink while he’s in the field.  When Jay got home on Wednesday we headed to Hops on Birch for a celebratory beer.  Jay tried the Four Peaks Barley Wine and I tried the Great Divide Belgian Blonde Ale.  Both were quite tasty.

Something New:  Jay got to know the new folks on his crew.  I checked out a new Zumba class for the first time.

Highlight of Being in One Place:  I have joined the recreation center and am really enjoying the classes and facilities there.

This week flew by as I helped to facilitate our three day staff retreat and then took off on Saturday to fly to Chicago for the National Conference on Service and Volunteerism.  Both events were stimulating and energizing, filling my head with too many ideas for how to make a difference at work and in the community.  Unfortunately in the middle of the conference I got sick and missed a day’s worth of sessions, but I still had a great time overall.  It was especially great to connect with past colleagues like Barb, Susan, and Kathy, and make new connections with AmeriCorps Alums.

Chicago is a really neat city.  I’m decidedly not a city girl, but if I could choose one city to go back to and see more of, it would be Chicago.

While I was traveling to Chicago, Jay was starting his new position with American Conservation Experience.  By the time I got home he had already left on his first field work trip to Dixie National Forest in southern Utah.  He was very excited for the project and hopefully he will have stories and pictures to share when he returns on Wednesday.

Volunteering:  Sharon gave a tour of Riordan Mansion on Friday.  Sharon also continued promotion of the 20th Annual Made in the Shade Beer Festival.

Beer of the Week: The most prevalent local brewery in Chicago seemed to be Goose Island.  I was very impressed by their Belgian style Matilda.

Something New:  I explored downtown Chicago for the first time while Jay went on his first field work trip with ACE.

Highlight of Being in One Place:  The chance to go away on a trip and actually have a home to return to! 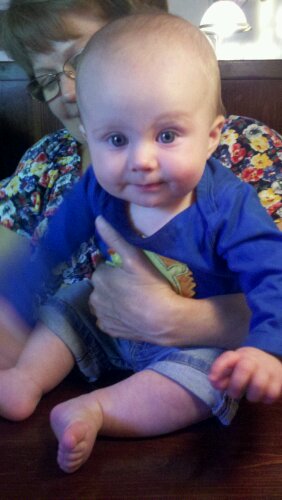 So this week we have some exciting news.  Jay has accepted an AmeriCorps position with American Conservation Experience.  He starts this coming Sunday and will be serving as an Assistant Crew Supervisor.  This is a great fit for his skills and interests and will hopefully transition into an ongoing position with a conservation crew.  If that’s the case we will be putting down some roots here in Flagstaff.  It’s too soon to tell if that’s what will happen, but it’s nice to know that might be a possibility.  Congratulations Jay!

Rachel shows off her party trick

This past weekend we had a great time hanging out with Jay’s friend from Phoenix, Sarah and her sister Rachel and nephew Charlie.  We also got to spend time with Jay’s parents who came up to escape the Phoenix heat.  We all did the Flagstaff Ale Trail together on Saturday and had a great time.  Sunday, Cindi and I went on an interpretive hike led by Steve and Lois Hirst.

Volunteering:  Sharon gave a tour of Riordan Mansion on Friday.  Sharon also continued promotion of the 20th Annual Made in the Shade Beer Festival.

Beer of the Week: Well, since we did the Flagstaff Ale Trail again we got a great sampling of local brews.  We love the Maibock at Beaver Street, enjoy the new blends at Mother Road, are happy with pretty much everything Cosmic puts out, and enjoy Flagstaff Brewery’s Blackbird Porter.  Lumberyard disappoints only because they never have their full line up at the tap room to sample.

Something New:  Jay got a job!  To be more specific, he will be serving as an AmeriCorps member for the American Conservation Experience.

Highlight of Being in One Place:  Sharon signed up for summer soccer and had her first game this weekend!

This week we got the chance to travel again, first to Jay’s grandmother’s house in Prescott, then to Jay’s parents in Phoenix, and finally to New Orleans.  The occasion was my high school friend Andy’s wedding.  We were pleasantly surprised to find that many other friends had made the trip (we are spread out all over the country), creating a mini 10 year high school reunion.  Only this reunion had the best food, a fun location, and a fabulous wedding!  Congratulations Andy and Margaret, we are so happy for you!

Yes, those are flamingos behind us in the picture.  Andy and Margaret’s reception was at the Audubon Tea Room at the zoo!

Volunteering:  Sharon continued promotion of the 20th Annual Made in the Shade Beer Festival.

Beer of the Week: Well, the beer we drank the most of was the Abita Amber, but we preferred the Abita Turbo Dog.  Actually, the best beer we tried in New Orleans was the Crescent City Brew House’s Black Forest.  Thanks Kate for the recommendation!

Something New:  Neither of us had ever been to New Orleans before.  We really enjoyed our trip and hope to go back when we can explore the surrounding area as well.

Highlight of Being in One Place:  This week we spent very little time at home, but having a home to return to is probably one of the best things about being in one place.

Video of the Week:

Service Driven
Create a free website or blog at WordPress.com.