Repairing Trails in the Largest Municipal Park in the U.S. 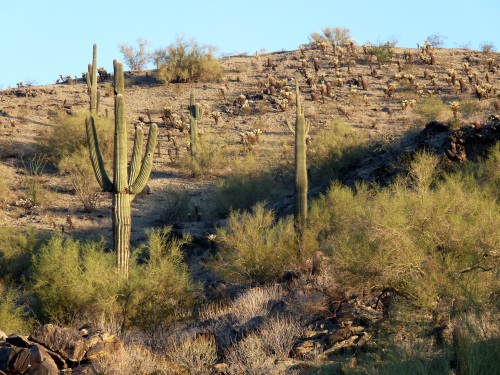 South Mountain Park, where Jay started his epic mountain bike ride last week, is the largest municipal park in the country.  It has over 50 miles of primary marked trails, and 100 of miles of social trails, many of which shouldn’t be there.  The park is home to natural and cultural treasures with rare flora and fauna and historic petroglyphs.  Surrounded by residents of the city of Phoenix, this park is very heavily used and in desperate need of some TLC.  Last Tuesday and Wednesday we had the pleasure of working with Volunteers for Outdoor Arizona to work on the Pima Wash Trail and Beverly Canyon Trail.

Using hand tools like the Macleod shown above, we fixed drainages, rehabilitated social trails, and rerouted a few sections of trail that were not well designed.  Surprisingly enough, water plays a huge role in trail sustainability in the desert.  It might not rain very often, but when it rains it pours and it doesn’t have a lot to slow it down in terms of vegetation so it just runs across the landscape, taking rocks and deadfall with it.  There were a few sections of trail where the path that the water follows and the path that the hikers follow were the same, creating deep ruts and wider trails where people tried to go around the rocks and ruts.  In these sections we worked to find a new path for the line that would be more sustainable.  In the sections that we re-routed we also had to rehabilitate the old trail so that people would know to use the new one and so that the desert could start to reclaim that previous path. 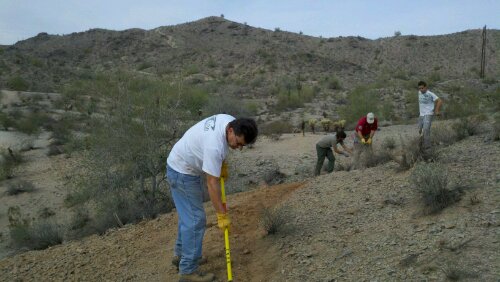 Jay and I really enjoyed working on the reroutes, because you have a lot of room to be creative and you get to see a vast improvement in a short amount of time.

Our other main work involved using rocks to reinforce drainages.  By digging out a path for the water to go beside a trail and then layering it with rock, we hoped to keep the trails intact.  Rock work is always challenging.  In this section you have lots of great rock to work with, but hiding under almost every rock is a creepy crawly.  You learn to turn over rocks away from you and with great care. I saw more scorpions in two days than I have in at least the last year.  Once you have gathered the rocks it can be fun to build the drainage, because it is a lot like working on a puzzle.

We really enjoyed working with Mike and the other crew leaders from VOAZ.  They have been doing trail work for many years and have developed some great techniques for building great trails and for working together safely and effectively.  I hope we have the opportunity to work with them again in the future.